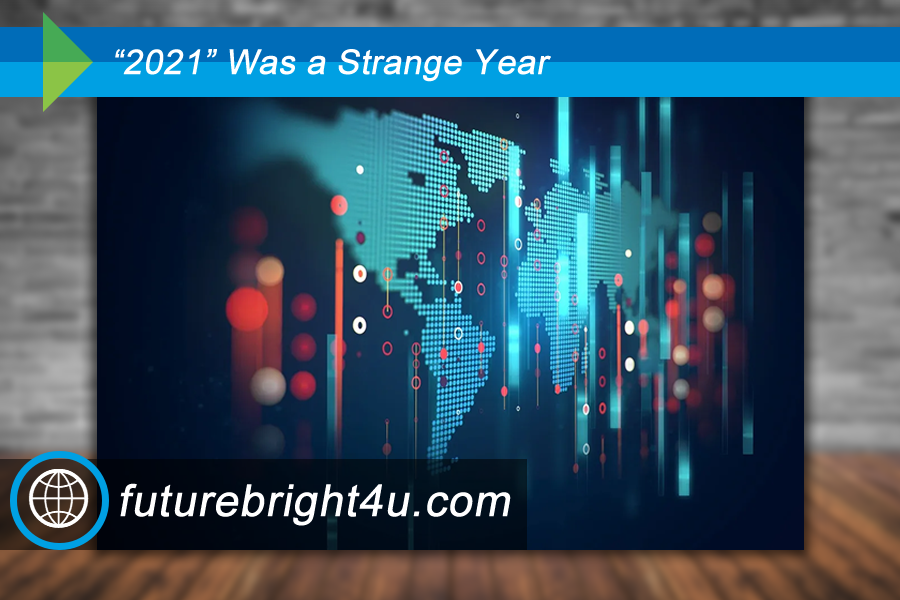 Happy New Year! It’s only fitting that our quarterly newsletter would be affected by supply chain issues. If you didn’t notice the difference, we can only credit the capabilities of today’s laser printer technology. Unfortunately, ordering official letterhead in late November did not allow for a lengthy enough window to receive a fresh stock by January 1.

2021 was a strange year in so many respects. Here’s a reminder of some oddities we experienced…
• American workers were incentivized to not return to work
• COVID variants ran amok
• Inflation reached its highest level in 40 years (CNBC.com)
• 2/3 of stocks that make up the S&P 500 Index hit 52-week lows while the S&P 500 index set all-time highs (Leon Tuey, Financial Post)
• 93% of companies on the S&P 500 saw their shares slide 10 percent or more at some point in 2021 (Taylor Telford/Rachel Siegel – Washington Post 12/31/21)
• Crude oil prices roared back into the mid-80’s in October due to reduced supply (Yahoo Finance – historical prices)
• Krispy Kreme became publicly traded again (let’s call this one a blessing and a curse)
• Dogecoin advanced 3,400%, and most people don’t even know what it is

We could fill a whole page with oddities, but I’ll spare some space for commentary. Predicting market outcomes in 2021 seemed as challenging as ever. Even the brightest and the biggest hedge funds out there struggled to navigate this past year’s market. According to Bloomberg, 37 of the 40 largest hedge funds underperformed the S&P 500 index in 2021. The year just didn’t feel as good as it turned out.

During the dot-com bubble of the mid to late 1990’s, ex-Fed Chairman Alan Greenspan coined the phrase “irrational exuberance”. He was referring to the extremely bullish sentiment that investors had for stocks whose prices were way out of sync with their intrinsic values. Moreso than in any year in recent memory, we get asked if we are reaching that level of insanity again. “Is the market setting up for a crash?” If we could foretell the answer to that question, we’d either be in 100% cash on the sidelines or all-in 100% on the stock market.

As elevated as markets seem, we don’t feel like we are living in the age of over-hyped sock puppet companies. Back in 1999, many stocks climbed astronomically without producing a dime of company revenue. It was truly a bubble of unproven ideas and ventures, most of which failed to produce any long-term results. Most of the technology companies that are worth their salt in discussion these days do have actual revenues to back up their words. The market is also narrower now with less than half of the companies in existence today than there were back then. This downsizing of the stock market has also caused it to get very top heavy – more dollars chasing fewer companies. Apple is a great company, and its market cap (stock price X number of shares in circulation) just hit $3 Trillion. It now accounts for 7% of the S&P 500’s total weighting.

Heading into 2022, we will keep watching the GDP and inflation data as our two primary determinants of market direction. So far, the high inflation has not led to significant demand destruction. Wages have also increased in 2021, and that has offset some inflation pressure. Our hope is that inflation doesn’t become too hot for American consumers to handle. Best case scenario would be to see inflation peak in 2022 and GDP to keep growing. Worst case scenario would be to see the opposite occur. Let’s hope for a good, albeit unpredictable, outcome.